This photo has more processing on it than any I have ever done before.  I saw a similar photo in a photography magazine and set out to recreate it.

This is my wife.  I promised her flawless skin so she agreed to sit for me :)

To start I had to get her to put on make up in a different manner.  She went heavier on the mascara, more eyeliner, she drew some in her eyebrows as well.  The last thing was some bright lipstick. Later I found a glossless lipstick would be better.  I needed the make up to make sure her features stood out.

I lit her with two softboxes on studio strobes in a fairly standard manner (45 degrees from front and above her).  You can see them reflected in her eyes.

Once I picked a photo from the many dozens I took ("I thought this would only be 5 minutes?") I did a few things to it.

Working at first in Lightroom I checked the white balance and adjusted a bit.  I increased the contrast a lot and increased the clarity.  I also clones out anything that may show up later (she had a small red spot under her eye), and I used the adjustment brush to soften her skin.  I also used this to enhance her irises a bit to make the colour stand out more.

From here I left Lightroom.  For those that do not know, this is rare.  Since I do not do much outside Lightroom, I only have PhotoShop Elements, but this was enough.

I added an adjustment layer to increase the contrast again.

I added a B&W layer and set the light to hard.

I added another overlay layer and used the paint brush tool to paint out anything I did not want with white. 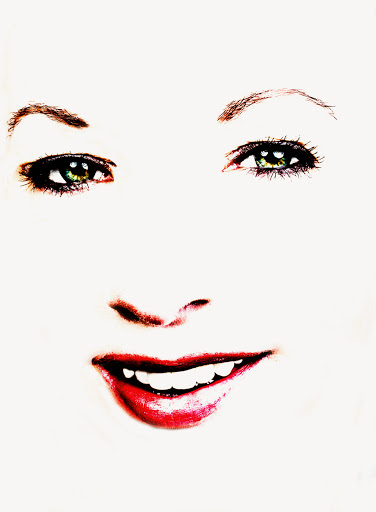